THE RAILROAD OPENING UP THE WEST 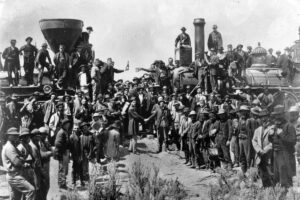 Western Spirit: Scottsdale’s Museum of the West is proud to announce The Railroad Opening Up the West, a new exhibition sponsored by Frankie and Howie Alper that tells how the transcontinental railroad transformed the American West.

Western Spirit contracted with members of the train clubs of Scottsdale’s McCormick-Stillman Railroad Park to undertake the exhibition’s design, fabrication, installation and ongoing management.. The display features period HO and G scale train sets that will operate hands-free and will include images and sounds appropriate to the various vignettes, including the driving of the Golden Spike, Harvey Houses, the Harvey Girls, El Tovar Hotel at the Grand Canyon, La Posada Hotel in Winslow, Arizona, and the Kansas City and Los Angeles Union Stations. Monitors recount the stories represented in each of the modules. 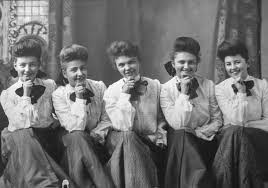 The Golden Spike—the last spike that symbolized the connection of the East and West Coasts of the United States by rail—was commissioned by David Hewes, a friend of Central Pacific Railroad President Leland Stanford, and was cast by the William T. Garatt Foundry of San Francisco. The spike was 5 5/8 inches long, weighed 14.03 ounces, and was made of 17.6-carat gold. It was presented at the Golden Spike Ceremony at Promontory Summit, Utah Territory, on May 10th, 1869.

Fred Harvey founded his Harvey House hotels in 1876 to serve the nation’s burgeoning number of railroad passengers. Harvey and his hotels helped make the American Southwest a tourist destination. They were instrumental in fostering the popularity of the Grand Canyon as a must-see attraction. In 1883, Harvey decided that the serving staff in his hotels would be comprised entirely of educated, unmarried young women, many of whom saw this as an opportunity to travel and achieve a measure of independence. These young women in their starch-white aprons were celebrated in the 1946 MGM musical—The Harvey Girls starring Judy Garland. Harvey’s clean, charming establishments brought an upscale experience to travelers in the West. 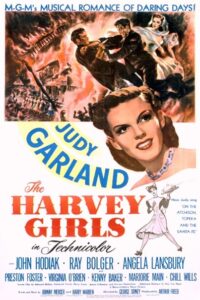 One of the Fred Harvey hotels was the El Tovar, which opened its doors on the rim of the Grand Canyon in 1905. Designed by Charles Whittlesey, Chief Architect for the Atchison, Topeka, and Santa Fe Railway, the El Tovar hotel-designated a National Historic Landmark in 1987—is part Swiss chalet and part Norwegian Villa. In 1930, Harvey opened the magnificent La Posada Hotel in Winslow, Arizona. Architect Mary Elizabeth Jane Colter—who worked for Harvey from 1905 through the 1950s—designed the hotel based on her vision of the kind of estancia a wealthy Spanish family might have developed and expanded over generations. 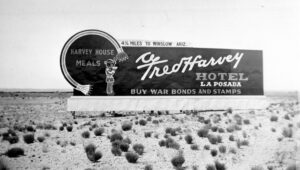 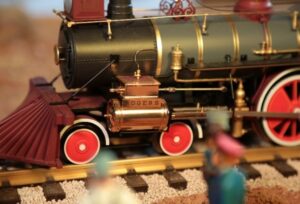 The Railroad Opening Up the West” Exhibit photographed by Christopher Vasquez

“The building of the first transcontinental railroad opened up the West to more rapid development and made it much easier to travel from coast to coast, unleashing a flood of growth as immigrants migrated westward,” says James Burns, executive director of Western Spirit. “This engaging historical display is interactive and fun for families of all ages, We look forward to sharing it with our visitors,” added Burns.

Richard Fillman, a local train enthusiast who supervised the construction of the exhibition, says, “with the exception of the federal government, no one institution more fully shaped the appearance and character of the American West than the railroad. We are anxious to showcase the rich history of how the railroad built the West.”