Riding off into the Sunset – Bruner Reception Surprises at Western Spirit 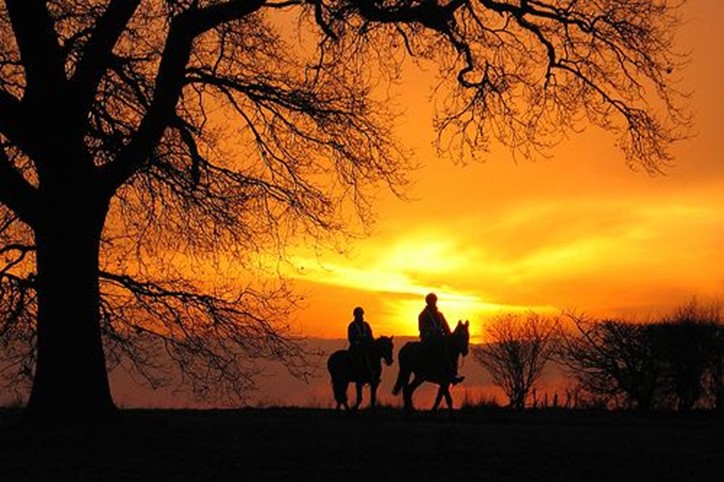 Once outgoing Chairman of Western Spirit’s Board, Jim Bruner, handed the reins to Bill Ridenour and became Chairman Emeritus, the Annual Meeting moved to the Scottsdale Artists’ School and transformed into a splendid surprise—a reception honoring Sandy and Jim Bruner.

Diana and Trustee David Smith helped turn out the crowd of friends and well-wishers who were there to greet the honorees. Executive Director James Burns, Founding Director/CEO Mike Fox, and the new Chair, Bill Ridenour, made speeches that paid tribute to Bruner’s outstanding leadership and many years of service to the museum—long before it even was a museum. Members of the Scottsdale City Council, the former Chief of Police and other local administrators who worked with Bruner were in attendance. Scottsdale Mayor David Ortega was on hand to proclaim “Jim and Sandy Bruner Day” in the city. 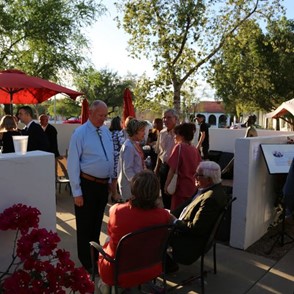 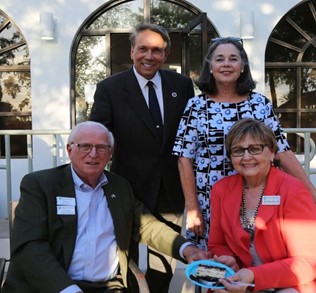 Mayor David Ortega, his wife – Rosemary Gannon and The Bruners.

Trustee Joan Fudala spoke to Sandy and Jim Bruner’s many contributions to Western Spirit and the City of Scottsdale. She played a video of over 400 photos of the founding of the museum and its first seven years. Fudala and Diana Smith then made what was perhaps the most extraordinary announcement of the afternoon—the formation of the Jim and Sandy Bruner Scholars Program. Funded by the Trustees and other donors, this program will offer financial assistance to interns working at the museum, with the goal of encouraging them to consider careers in the museum field.

Tulips, the Bruners’ favorite flowers, decorated the event, while a cake with a horse theme was a special treat. The Bruners were also presented with a number of gifts, including framed Edward Curtis photographs from Board Trustee Tim Peterson, and a fun hobby horse from Ridenour for Bruner, to give him something to “ride into the sunset,” as Bruner claimed he would do after stepping down as Board Chairman.

Bruner has often declared that his dream is to see Western Spirit on the front page of The New York Times; he was presented with the next best thing, a mockup of a “special edition” front page of the Times with the headline, “The Cowboy Rides Off Into the Sunset: Overflow Crowds Continue at Western Spirit!” A photo of Bruner superimposed onto an image of a cowboy at dusk illustrated the story. 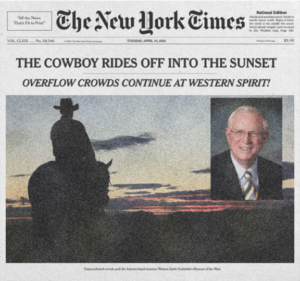 Headlines in the New York Times

Bruner said he and Sandy were “speechless” when the Jim and Sandy Bruner Scholars Program was unveiled. He added, “Contrary to my comments about “riding off into the sunset,” due to my horse making a U turn, we are back in town and will continue to be active at the museum.”

Thank you to JoyRides AZ, who supplied Western Spirit with golf carts to transport some of our guests to the Scottsdale Artists’ School. 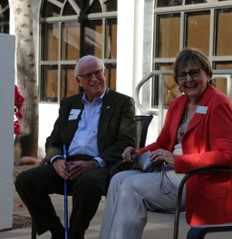 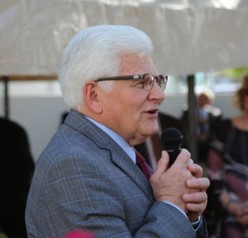