Conversation with David Sherf, newly appointed, Vice-Chair, Board of Trustees 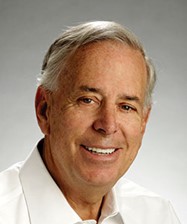 “Once, in 1955,” David Sherf says, “I was riding with my grandfather on his tractor, discing old wheat, when we heard a ‘clunk.’ We got out and dug and pulled out a rusty pistol. My grandfather turned it over in his hand and said, ‘I lost that pistol in 1921.’”

When this story and others from his youth hit home about 20 or 30 years ago, the origin of David Sherf’s fascination with the American West became crystal clear to him.

“I’d lived in Denver since the early 1980’s,” Sherf opens. During the oil boom, I would sometimes find myself in offices where the walls would be lined with magnificent Western art. I was drawn to these scenes from history, so after we moved to Scottsdale and I saw all the hoopla around the opening of Western Spirit, I approached Jim Bruner. I’ve been a Trustee since 2016. But that isn’t the story. The story really begins long before Western Spirit, and long before my time in Denver.”

Sherf warms to his theme. “My father was a professor at Iowa State University in Ames, Iowa. My mother’s parents lived on a farm in the town of Davenport, Nebraska—population 400, no paved roads—and from the time I was six, in the early 1950’s, my parents would put me and my younger brother on a Greyhound Bus, or sometimes on the train, and send us to Davenport for visits.

The Oregon Trail went right through Davenport. The town sits on the Little Blue River, which flows into the Platte. There were wagon ruts in the limestone—that’s how well-traveled the trail was. My grandfather would find objects discarded from the wagons, all manner of things the pioneers didn’t have room for, or things that were slowing them down.

“Davenport was that kind of place,” Sherf continues. “There were deep cuts in the prairie and people used them as a dump. Everything went in there. Even cars. And there were homes in town where the people had lost their jobs. And they’d just left. Whole families. Sometimes the tables were still set, and the curtains were still hung, blowing in the breeze.

“I love the art at Western Spirit. How it shows just how rugged the culture of the West was and the grit it took to make a life there—not to mention how vast the spaces are—but art is always mediated through the artists’ perceptions. For me, it’s the artifacts at Western Spirit that tell the greatest story. I look at them and think, ‘What stories they could tell if they could speak!’”

When asked about his favorite objects at Western Spirit, Sherf is quick to respond. “The Lewis and Clark Pipe Tomahawk. Just imaging the tomahawk making it through the great trek, and the chiefs in full battle dress presenting it. And the Kit Carson pouch, carried from the West to Congress and the White House. Who was in those rooms on the days Kit Carson visited? I also like the saddles in the Abe Hays and Fleischer exhibitions. What did those saddles see? Did that one belong to a homesteader who crossed the Rocky Mountains and chased down buffalo? Did that cavalry saddle see battle? What was that like?

“I enjoy letting my imagination go,” Sherf concludes. “The reality of the object combines with fantasy. I start to tell myself a story and it comes to life like the kind of dream where you wake and feel you’ve been there with a video camera recording history. Getting that story out and making it meaningful, that’s what we do at Western Spirit.”