“We are the change we want to see in the world: Walking that prayer forward with Chief Henry Red Cloud” 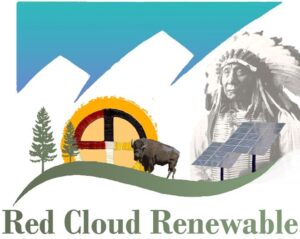 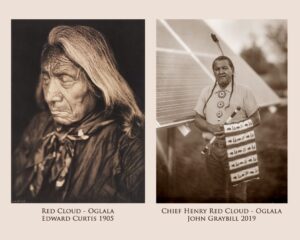 Inspired by the words and work of Chief Henry Red Cloud at a talk given with John Graybill, the great-grandson of Edward Curtis, at Western Spirit on March 31, Education Director Wade Weber heeded the call to action and pledged to volunteer his time over Memorial Day at the “Fire and Flame” weekend hosted by Red Cloud Renewable Energy Center on the Pine Ridge Indian Reservation in South Dakota.

Chief Henry Red Cloud grew up on the Pine Ridge Indian Reservation. After a decade away from home, he returned and “was struck by the despondency he found… Driven by his desire to make a significant improvement in the life of each tribal family, Henry began to focus on residential-scale renewable energy options.” Red Cloud Renewable’s mission has since expanded “to stimulate a significant revisioning of tribal communities where… meals are nutritional and fortified by traditional Lakota foods, homes are built in a sustainable way with local builders and materials, and the land is cared for and regenerated with the next seven generations in mind.” With this commitment to solar energy, new, energy-efficient homes, and community gardens, Chief Henry Red Cloud’s “New ways to honor the old ways” offer the promise of transformation in the lives of the Lakota people and “a new chapter in the relationship between Natives and non-Natives. One built on caring and sharing and mutual respect and working together to make a better world.” 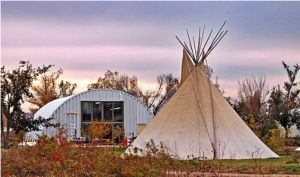 Wade, and Steve Enyeart, a good friend to Western Spirit, flew into Rapids City. They drove first to the Wounded Knee Massacre site, studying the field and paying their respects at the memorial before continuing on to the Red Cloud Renewable Energy Center. Once there, they were housed in one of the “new way” dome-shaped tiny homes and were put to work helping demolish a large, circular straw-bale warehouse to make room for many smaller homes. They salvaged as much as possible from the straw-bale building. Dozens of inch worms kept them company on their hats, shoulders, and backs, falling from the overhanging trees as they worked. Afterward, they drove to the beautiful hilltop gravesite of Chief Henry Red Cloud’s ancestor, the storied Chief Red Cloud (1822-1909). A roaring campfire, the rhythms of a powerful Lakota drum circle, and skillful fire spinning brought the day to a spiritual close. 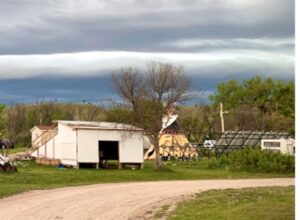 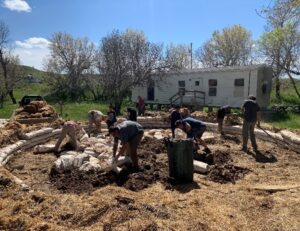 Throughout the weekend, Chief Henry Red Cloud led groups from around the nation and around the globe, explaining the mission of the Red Cloud Renewable Energy Center, including planting some 200,000 trees on Pine Ridge Reservation lands.

Perhaps Henry’s ancestor’s prophecy, as restated by Richard Fox, Director of Programs and Services at Red Cloud Renewable – “that it would take the Lakota seven generations to recover from the clash of cultures they were experiencing in the late 1800’s”—is coming to pass. Some 120 years ago, Red Cloud, the last war chief of the Lakota, and his people raised their sacred pipes and made this prophecy a prayer that echoes down to the present. Chief Henry Red Cloud confirms this with his work and words, saying, “Today I am walking that prayer forward.”