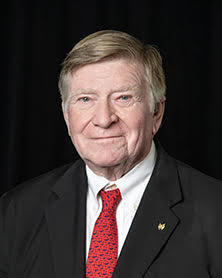 Bill Ridenour is a Founding Trustee and Counsel of Scottsdale’s Museum of the West and is Chairman-Elect. A true community leader with long ties to the state of Arizona, Ridenour served as an aide to Senators Barry Goldwater and Paul Fannin. As an attorney with Fennemore Law,  Ridenour continues to address and manage financial and investment transactions concerning bank regulatory compliance, loan negotiations and documentations, securities lending and holding company formations. A graduate of the University of Arizona, he maintains close ties to Arizona’s higher education system, having just served two terms as Chairman of the Board of Regents. He is also an avid collector of Western Art.

Western Spirit: Can you tell us something about your background and how you became interested in the story and art of the American West?

Ridenour: My background is unique. As a fourth generation Arizonian. with both sides of my family coming early to Arizona, our history is part of the story of the Old West. My great grandfather, William B. Ridenour came to northern Arizona in 1872, looking for gold. He and three others ferried across the Colorado River near Parker and traveled with their mules all across Northern They were  attacked by a party of Utes in the Grand Canyon and lost their miles. On the way back to the coast they struck gold and founded the town of Hackberry, Arizona. Eventually, the family owned gold mines in Chloride, Mineral Park, and Oatman. They also had a ranch near Elko, Nevada and lost all their cattle in the blizzard of 1898.

I grew up in Oatman, a town right out of the Old West, and moved to Kingman in 4th grade. For eight straight grades I had one teacher in a one-room school. The family corresponded with Wyatt Earp to try to get him to promote our mines. He was near Parker at the time but decided to head to Nome, Alaska to assuage his own gold fever.

The other side of my family is equally interesting. My Grandfather, Gilbert Wheelock, was a direct descendent of Eliazer Wheelock, who founded Dartmouth College. My grandmother’s maiden name was Young. That family settled in New Mexico after the Civil War and ran a dry goods store in White Oaks, New Mexico —“Young and Telifferio.” One day a young man came in and bought a hat. He gave them an IOU. That young man was Billy the Kid.

The family lost three children in New Mexico and headed north to join the Alaskan Gold Rush. Eventually, they came back and opened a store—“Young and Ridgeway”— in Safford, Arizona and traveled to Bowie to see Geronimo put on the train to Florida. 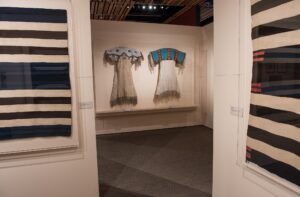 I grew up with Native American rugs and pottery—my grandfather had a mine in the Grand Canyon and Native arts were readily available there—and I went to school with Hualapai kids. Each year, my family took in a student each from Havasupai.

Western Spirit: If you were to meet someone who has never been to SMOW, but was thinking about visiting the museum, what would you say to them? Why are museums, especially those like Western Spirit, important today?

Ridenour: I always meet people who haven’t yet been to Western Spirit. The first thing I tell them is that they should see the Peterson Collection, Courage and Crossroads: A Visual Journey through the American West, where you can trace Westward Expansion through art from the early works of Bodner and Catlin right through today’s artists. I also mention Canvas of Clay: Hopi Pottery Masterworks from The Allan and Judith Cooke Collection as it tells the important story of the progression of pueblo pottery making over the centuries and the revival from the artistry of Nampeyo forward to the present.

Western Spirit: Can you tell us about a favorite object in the museum, what interests you about it, and why others should experience it for themselves? Perhaps a hidden gem or an object that connects the past of the American West to the present—and future?

Ridenour: There are so many unique items. Some of the artifacts on second floor are the best of their kind in existence—the Navajo rugs in Phases 1, 11, and 111, for instance. The Lewis and Clark pipe tomahawk is unique, the Native American beadwork is some of the the best anywhere, and some of the pieces in the Abe Hays collection are unmatched.