5 QUESTIONS WITH BOARD MEMBER – PHIL HAGENAH 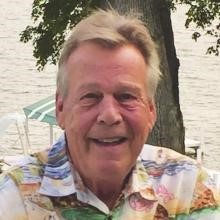 Q: You and your family are no newcomers to Scottsdale and the Phoenix area. Would you talk a bit about your family’s background here?

A: I’m from the 4th generation in my family to winter in Arizona. My great-grandparents first stayed at Castle Hot Springs Resort— one of the oldest resorts, if not the oldest, in Phoenix—back in the early 1900’s. My family’s love of the West—and Western art, which was part of the decor of the resort—really begins there. My grandparents bought a winter home in the area and my father, who worked as Treasurer for the Chicago Cubs, began coming here for Spring Training when the Cubs moved—first to Mesa, then to Scottsdale and, finally, back to Mesa. I started coming here with my family in 1955. Spring Training was different then. There might be 30-40 people at the games. And the rickety bleachers in the stadiums—you’d come home with splinters! But the players were really having fun then. You’d see them around town. They were part of the community. Baseball wasn’t such a big business then.

Q: You added your voice to the call to upgrade Cactus League facilities in the 1980’s. Tell us about that.

A: When my wife and young kids moved to Arizona from Chicago in 1981, I was working for Valley National Bank, specifically, our VNB client, Warren Goodrich. Warren, who had played AAA Baseball, invited me to some meetings in Mesa, Phoenix, Scottsdale, Tempe, Goodyear, Glendale, Surprise, etc., where we let the local officials know that they had to start re-building stadiums, and luring new teams to Arizona—as well as keeping the old teams. We pointed out the incredible economic benefits to our local communities and let them know that the Grapefruit League—Florida’s Spring Training towns—were looking to poach some of our teams. So I became a kind of cheerleader for the Cactus League.

Q: How did you become involved with Western Spirit?

A: I read about the museum when it opened and came to see the first show, featuring Fritz White’s paintings of the Lewis & Clark expedition. That hooked me and I became a member. I have been an Edward Curtis fan forever, and when the announcement about Light and Legacy was made, I contacted Mike Fox to ask him if the museum planned to work with Arizona Highways. That, in turn, led to meetings with Mike and Jim Bruner and, because they liked my enthusiasm—and because I haven’t learned to say no—I joined the Board. The Marketing Committee is relatively new, but it’s exciting working with David Scholefield and the rest of the group, thinking of strategies to attract new audiences to Western Spirit.

Q: Which exhibitions and objects at Western Spirit would you count among your favorites?

A: Photographs by Barry M. Goldwater: Selections from the Arizona Highways Collection and the recent show we did with Arizona Highways magazine—The Art of Our Photography, where 10 artists were selected to choose a photograph from the magazine archives as inspiration and then paint their own interpretation based on the photo. That was fantastic and I hope we do that again.

Q: Do any of the images in the Curtis exhibition stand out for you?

A: The Canyon de Chelly photo with the dog and the riders against the towering cliffs is striking… They are so small and the cliffs are so large. The sheer sense of scale is incredible… But that’s the human creative mind. It’s amazing to me. Always at work. Artists making beautiful new images and objects. Writers publishing wonderful new books. New artists. New writers. And curators—like ours at Western Spirit—coming up with incredible new exhibitions. In fact, I recently read a terrific book about the West called The Emerald Mile by Kevin Fedarko. It’s about the Colorado River flooding dangerously in 1983 after storms and a heatwave melted the snowpack all at once. The Glen Canyon Dam almost failed. Meanwhile, three river guides decide to tempt the raging river and break the speed record for running the Grand Canyon in a boat. The book has everything: history, nature, action. I can’t recommend it highly enough. There’s always something new to learn. I should also put in a word for Timothy Egan’s Short Nights of the Shadow Catcher: The Epic Life and Immortal Photographs of Edward S. Curtis. It’s a thoroughly enjoyable introduction to Light and Legacy: The Art and Techniques of Edward S. Curtis.