Noted Edward Curtis Authority, Richard Lampert, to whom Light and Legacy is dedicated, tours the exhibition

We caught up with Richard Lampert, of Santa Fe’s Zaplin Lampert Gallery, after his visit to Western Spirit to see Light and Legacy: The Art and Techniques of Edward S. Curtis. Lampert has been instrumental in the formation of The Peterson Collection and was one of the group that rediscovered the work of Edward Curtis in 1972 in the warehouse of Lauriat’s Book Store in Boston. Western Spirit Board Member and Co-Curator of Light and Legacy, Tim Peterson, dedicated the exhibition to Lampert and credits him with “helping me realize the importance of Curtis and his vast body of work. Over the past 20 years, Richard and I have worked together to build my collection. Throughout this time, Richard has been a valued advisor and wonderful friend.”

“Mark Zaplin and I were childhood friends,” Lampert opens the conversation. “Born 12 days apart. We were young entrepreneurs and business partners forever. We sold everything from insurance to the “Great Books of the Western World.” When we were 20 years old, in college, we were part of a small group that stumbled onto thousands of unbound Curtis photogravures and copper plates. Lauriat’s had acquired them from J.P. Morgan and Curtis in the 1930’s after the project ended and Curtis had to forfeit all rights to it. But it wasn’t until we saw a complete portfolio, Volume XVII of The North American Indian, the New Mexico volume, that I realized what a treasure trove we’d found.” 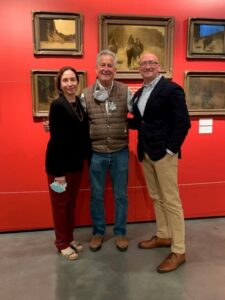 “At the same time,” Lampert goes on, “there was a resurgence of interest in Indigenous culture and renewed Native American activism, so the timing could not have been better. Mark and I started out in Cambridge but soon realized that they had more interest in Samuel Adams than in Geronimo, so it was ‘Go West, Young Man’ for us. Mark set up shop in Colorado while I settled in Washington State, where Curtis made his home and had his studio. It was there that I found people who knew of him and his work and it was there that I also unearthed his orotones and other master prints he would produce during the winters when he was home.”

Describing the exhibition, Lampert observes, “Tim Peterson is a collector with a curatorial vision. There have been other Curtis shows, but nothing this comprehensive, or with this kind of cohesion. And there may never be anything to match it again. Eight different versions of The Oath hanging together! Not to mention the ephemera outside of The North American Indian material: rare family photos and images from the end of his life and career, the camera, the music he recorded. Areas devoted to the people he worked with and those who supported his work: Teddy Roosevelt, J.P. Morgan, countless others. The museum did a beautiful job executing Tim’s dream. You walk past the copper plates and the way they are angled and lit, they light up as you pass and then disappear, as if they are alive and then pass into shadow. The exhibition tells the story from start to finish.”

Lampert rises to his subject as the conversation goes on. “We’re seeing yet another resurgence of interest in Native American culture and Curtis has emerged, as he always does, as having created the most important anthology of Indigenous Peoples ever attempted. Can you criticize him? Sure. But when someone walks into the gallery and sees one of his images and says, ‘That’s my great-grandfather,’ it’s hard not to be moved by that and to see how lasting Curtis’s impact and achievements are.”

“You know,” Lampert says, then qualifies, “it turns out that Curtis died three days before I was born and fifteen days before Mark was born. When we finally met Curtis’s daughters, they believed we were linked to their father and that we were meant to rediscover his work. And it might be serendipity, but it feels that way, that it was meant to be, and that it was meant to culminate with this exhibition and with the gallery upstairs, where Tim has his Courage & Crossroads collection—which Mark and I helped with as well. Tim generously named that gallery after Zaplin Lampert.” 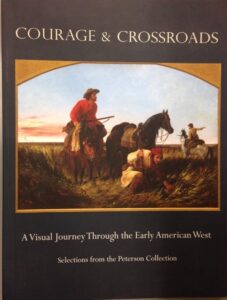 As he reflects on some of the images in the exhibition, it’s clear Lampert’s passion for Curtis hasn’t dimmed. “Favorites? Canyon del Muerto, where you can see, way in the back, Curtis’s wagon. Wishham Fisherman, showing the old fishing grounds on the Columbia River gorge, gone now since the damming of the river. In the Badlands, from the Sioux portfolio, depicting a place that’s still there for you to find. And At The Old Well of Acoma, which tells the story of a water source that has long since dried up.” 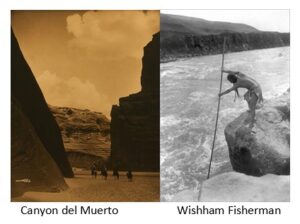 Lampert muses, “Can you imagine the moment when J.P. Morgan saw Curtis’s photograph of Mosa—Mohave and said, ‘I’ll back you?’ I had the same sensation when, in 1973, I was at the Nelson-Atkins Museum in Kansas City right at the start of my association with Curtis and their director said, ‘Let’s have a Curtis show.’ But now, having come full circle, it’s Tim’s friendship, the amazing objects we’ve found, and the trips we’ve been able to take together—tracing part of Lewis and Clark’s route, standing where Karl Bodmer stood on the Missouri River—it’s those experiences that make it all worthwhile and mean so much to me. I look at it this way, if Edward Curtis hadn’t come into my life, I might still be schlepping Kosher beef in Boston’s Quincy Market for my father.” 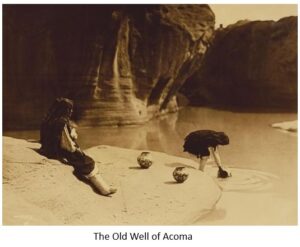 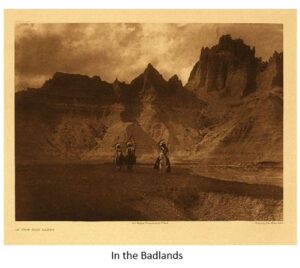