Not So Anonymous, the Women who Created Hopi Pottery 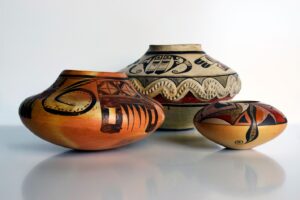 One of the most important writers of the 20th century—or any century—British novelist Virginia Woolf once wrote that, “For most of history, Anonymous was a woman,” referring to the overwhelming number of books, paintings, musical compositions, artworks, textiles, beadwork, jewelry, and pottery throughout human history that were never signed and whose authorship remains a mystery even as their artistry continues to enchant.

The beautiful Allan and Judith Cooke Collection of Hopi Pottery, a generous gift to the museum on permanent exhibition at Western Spirit: Scottsdale’s Museum of the West, spans almost 800 years of innovation, imagination, and craftsmanship. The first 650 years of the Cooke Collection bear out the truth of Woolf’s sentiment—these earlier works are masterpieces by women whose names are lost to us, veiled by time. Beautiful, utilitarian objects, these pieces of pottery turn out, after a deeper view, to be some of the fullest expressions and most profound repositories of a complex culture. One longs to reach back to learn who these women were and what inspired their art.

Perhaps the best of its kind, the Cooke Collection chronicles both continuity and change in Hopi pottery over centuries of development. An explosion of forms and experiments with color, firing, motif, shape, and symbolism characterize the Sikyatki Polychrome style that flourished from 1375 to 1625 c.e. A Kiva Mural bowl depicts a leg and prayer feather “tiponi” entering or departing the sacred space of the kiva as if from above, while another Polychrome Jar represents a three year period of the sixteen-day cycles of lunar ceremonial observance. This period saw the birth of the Katsina Cult, in which a pantheon of spirits—Katsinas, or Kachinas—properly appeased through ritual, would bring the rains, secure the harvest and hunt and ensure the prosperity of the Pueblos. As a result of this spiritual revolution—as well as the arrival of the Spanish conquistadors—the ensuing clashes, migrations, and influences saw the Hopi pottery tradition evolve and adapt, retreating at times, but never disappearing. 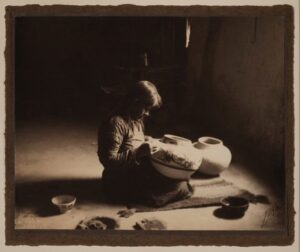 By the late 19th century, Nampeyo of Hano (1859-1942), the central figure in the Hopi pottery revival and a major American artist, resurrected the old forms and renewed them with fresh ideas and perspectives. Anonymity was a thing of the past.  Along with several contemporaries, Nampeyo saw and seized opportunities in the burgeoning market for Native art. Outstanding examples of Nampeyo’s work, like the Appliquéd Storage Jar from 1905, demonstrate her ability to adapt the long aesthetic tradition of Hopi pottery tradition to her own style. Her descendants continue to create masterworks in clay to this day and several of these are represented in the Cooke Collection.

Edwin L. Wade and Allan Cooke’s superb Canvas of Clay: Seven Centuries of Hopi Ceramic Art (available in Western Spirit’s gift shop or online at shop.scottsdalemuseumwest.org) chronicles the collection. Photos of the vessels in the book, especially the views from above, set the imagery in motion. Birds, feathers, insects, stars, and abstract, geometric forms, whirled about the central axis, the hole that allows entrance into a negative space, a spiritual, spatial realm of pure potential. Fugal, centrifugal, centripetal: what stories might be in there? Your stories. Mine. Stories with endings. Stories that haven’t yet begun. Stories waiting to be put together, to be told.  Flying in and out like fragments of dreams. The jars emerge as performative objects, alive on the stage of the world, representing the wheel of years and seasons, filled with will and wonder. 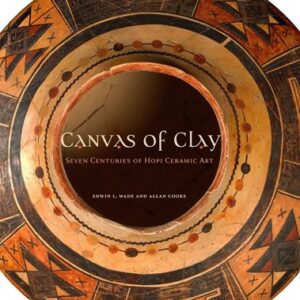 Every visit to the museum shows how other individuals and peoples in the past not only survived adversity, but triumphed over it, how they adapted, created, and remade themselves and their world. Through the many splendid objects and collections, Western Spirit breathes new life into artists whose names we know—like Nampeyo—as well as that most famous of all artists, Anonymous, who was, as Virginia Woolf wrote, “for most of history, a woman.”

Visit Western Spirit: Scottsdale’s Museum of the West. Spend some time on our newly redesigned website, scottsdalemuseumwest.org. Consider membership or, perhaps, a gift.