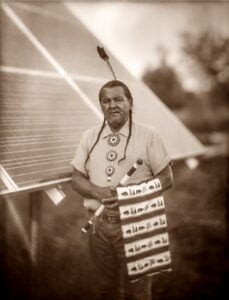 Henry Red Cloud is the direct 5th generation descendant of Chief Red Cloud, one of the last Lakota war chiefs and one of the most famous Native Americans in history. Henry was born and raised on the Pine Ridge Reservation in South Dakota, home of the Oglala Lakota Nation, where living conditions are extremely difficult.

For more than a decade, Henry has devoted himself to developing his expertise with renewable energy applications that are environmentally sound, economically beneficial, and culturally appropriate. Today, Henry is a twenty-first century Lakota Warrior, bringing green technology and employment to Native American communities. He reminds tribes that they can live sustainably and shows them that by embracing clean, renewable energy applications there is a way to get back to a traditional relationship with Mother Earth. As Henry says, “This is a new way to honor the old ways.”